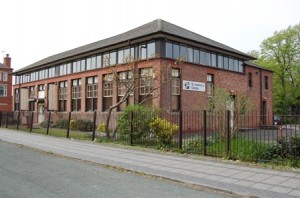 In 1982, the Centre moved to the then recently closed St Antony’s Junior School following the decision to re-develop the former “Village” Area within Trafford Park.  The Centre went from strength to strength and launched its first government funded training programme the following year and a job creation scheme.

In 1993, the former School building closed for re-development with the Centre moving temporarily to premises previously occupied by Barclays Bank on Third Avenue, Trafford Park.  The Centre re-opened its doors in January 1994 as a purpose-built facility, consisting of Conference, Meeting and Training rooms with office accommodation and new reception and exhibition area, which features the Trafford Park Heritage Centre.  The funding for the re-development project was supplied by the Trafford park Development Corporation and the Roman Catholic Diocese of Salford, establishing the first Centre for Church & Industry in the country.

In 2009 we opened the Accrington Community and Training Centre (ACT Centre) in Accrington, Lancashire in partnership with the GMB Reach Out Project, local Churches and the Community.

The Centre seeks to work with a wide range of Community Groups, Organisations, Churches and individuals to develop common objectives and to benefit the wider community through specific project.  The Centre works closely with the Ecumenical Greater Manchester Industrial Mission Trust, acting as its administrative base.

The Director of St Antony’s Centre is Kevin Flanagan.

Reflection of the Week