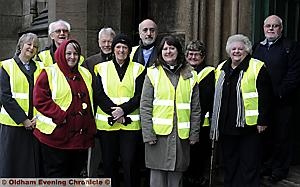 CHRISTMAS angels are coming to the aid of clubbers in Oldham town centre over the festive period. Dealing with drunks and clearing up booze bottles and vomit is all in a night’s work for the Street Angels volunteers.

The six-week pilot scheme sees the hardy band of 15 helpers in force from 11pm until 3am on a Saturday night. And the plucky team is poised for its busiest weekend when revellers flock to the town centre for celebrations on the last full weekend before Christmas.  The scheme, by Oldham’s Town Centre Chaplaincy, is backed by Oldham Council and Greater Manchester Police – and works closely with St John Ambulance.

Volunteer, Reverend Jean Hurlston, who is Ashton Sixth Form College’s chaplain, has seen similar initiatives successfully launched in Stalybridge and Bolton.  She said: “We are not preachers. We are there to keep people safe and demonstrate genuine pastoral care. Volunteers are not only from the church, there are people of all faiths involved.  We provide brews for those who need to sober-up, support anyone awaiting transport, collect empty bottles to avoid injury and simply spend time talking to people.”The highly-visible trained group are based at the St John Ambulance mobile centre in Yorkshire Street.  Inspector Melita Worswick, head of town-centre policing, called the Angels “invaluable stars”.  She said: “Their impact has proved vital, as they are allow the police and door staff to deal with the crime and disorder side of things.  For example, if you have got an intoxicated woman who has lost her shoe, it takes the door staff’s time and then they are moved on to the police to help them get home – so the Street Angels free-up time for us to focus on crime.”

When the project finishes after the New Year, the group will pause for review before hopefully continuing as an on-going support. They are attempting to find funding or donations for a building to provide a “cafe” and warm clothing, as they spend hours on the cold winter streets.